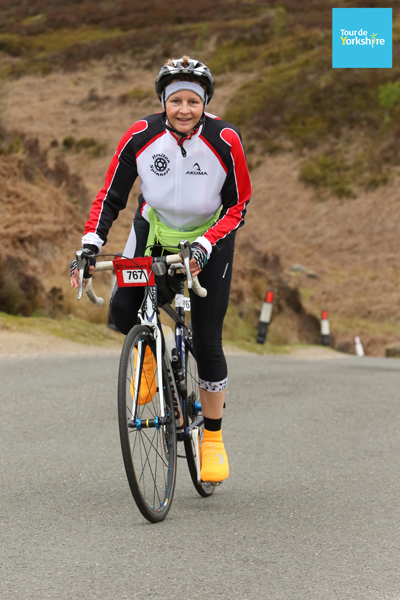 The route started in Leeds, a fair distance from the event village in the Millennium Square. It was bitterly cold and I was glad of my two pairs of gloves, headband, arm warmers and shoe covers; less glad of crop pants instead of long tights! The first 40km were undulating and I was wheel-surfing trying to find someone who was riding at a suitable pace to tuck in behind. This is a moveable feast as even when I find one, I usually fall away as soon as the road starts to climb.

Then came the first big test at Hartwith Bank, the description of which I have borrowed from www.ridethestruggle.com “Hartwith Bank begins steep – and just gets steeper. Hartwith Bank is narrow and not traffic free, so there’s no chance of using the road to zig zag your way. Unfortunately, it’s out of the saddle and straight up.

As you rise up between the houses the road takes you through a long, dark and tree-covered section. The eerie atmosphere and foreboding feeling evoke fear and self-doubt.

A wheel spin on the wet leaves or a bump on the uneven tarmac can mean it’s game over, foot down and you’re walking to the top.

Suddenly a right hairpin ramps up the gradient just as your legs are feeling the lactic burn. If you manage to keep momentum as the road then bends left, you’ll crest the top of the steepest section and can finally sit down, click up and tap your way to the top.

According to the Strava segment it averages at 11% but is 24% at its worst. I confess to walking a little of it in the middle.

After this there was quite a lot of descending until about 60km where we had a cat 4 hill nearly 6km long, topping out at 7.8% but averaging only 2.1% because of some short downhill respites. This was roughly where we joined the Stage 4 route of the TDY proper.

My water bottle was empty by the second feed station at Pateley Bridge but it was a seriously bad plan to fill it just before Greenhow Hill, all that extra weight up the beast, described here by Simon Warren “The toughest part of the course by some distance, this four kilometre climb is a formidable foe with maximum gradients of over 18%. Like a giant flight of stairs, the tough climbing comes in four distinct sections, broken up by periods of calm to allow partial recovery. Each steep stretch is slightly easier than the one before, and each rest slightly shorter until you leave the trees and face up to the block headwind which ALWAYS greets riders at the top. This may not be true, but I have never experienced anything else, and even though the slope is shallower over the last kilometre it has the tendency to feel just as hard.”

At 103km started the Cote de Otley Chevin which along with Greenhow you might have seen on the  Tour de Yorkshire highlights show. We were greeted with a sign which said KOM summit 1.7km and there followed what looked like a wall. The actual climb is 3km long, the first km is cat 4 and then the rest is cat 3, topping out at nearly 18%. The only good thing about this bit was that the road was closed by the time we got there so it was possible to zig zag up the hill safely. I walked 50m or so but got back on with 500m to go to the KOM line and gave a little spurt at that point because I thought I ought to! In my defence loads of riders walked far more and far earlier. There followed 9 km or so of mostly down until Tinshill Lane which was steep but mercifully short at 1.2km of between 5 and 8%. Some of the descending on this ride was exhilarating because it was straight down and you could see that you were going straight up at the end of it so didn’t need to slow down at all. I hit 59km/h at one point!

There was a little kicker of 10% at the 120km mark and then it was downhill all the way to the finish. It was in fact a very slightly uphill finish but at the speeds we hit you didn’t notice that. It was very exciting to turn into the barriered section and then suddenly have the finish in sight – that was actually a bit of a surprise as the last 20km had flown by. Spectators were in place cheering already, ready for the pro race later on, so it felt really special.