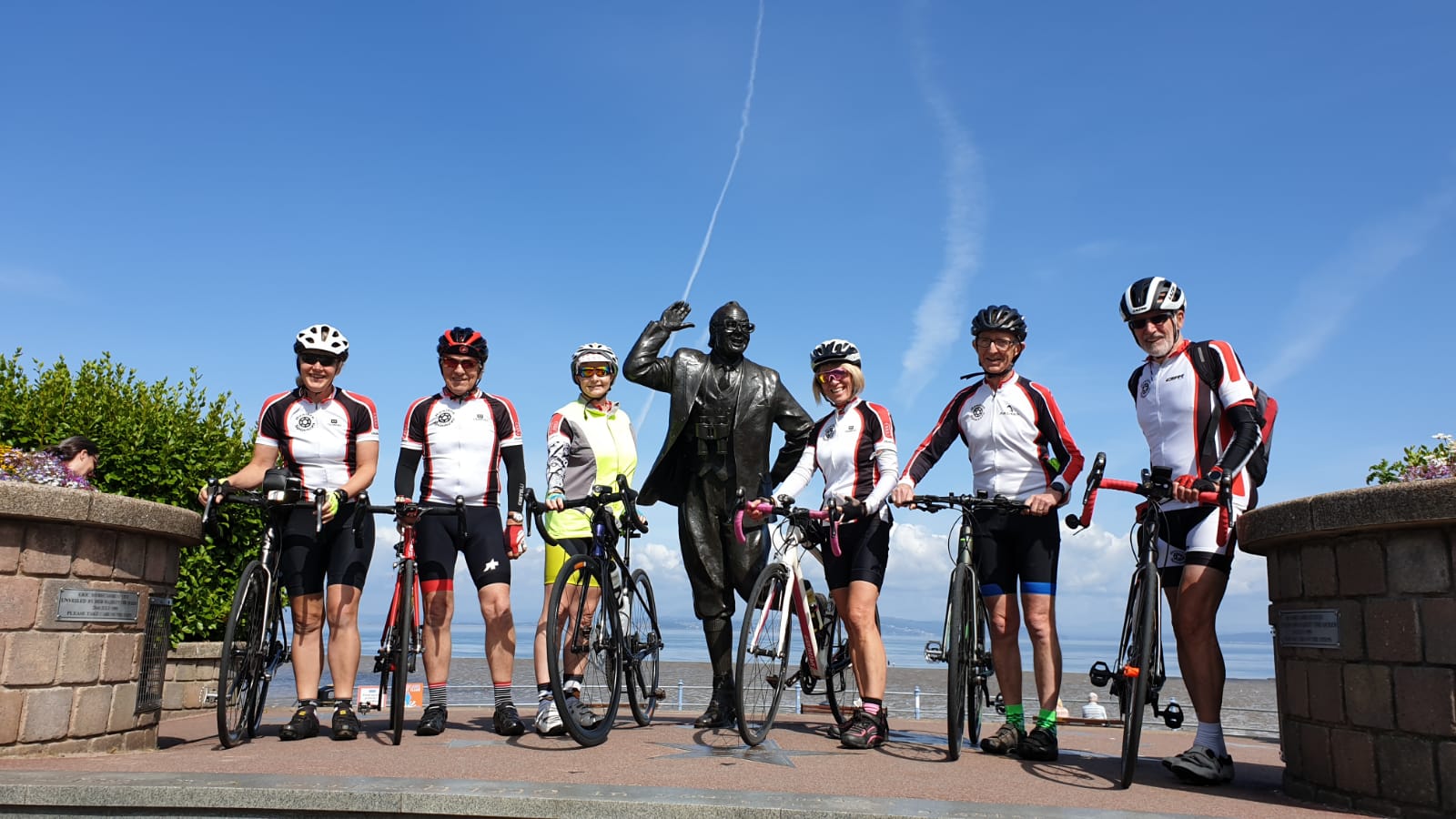 The Way of The Roses – Spinners Holiday Jaunt

In early August six members of Honiton Spinners headed north for a very enjoyable five days riding the Way of the Roses, a 170 mile cycle route that crosses the UK from Morecambe on the west coast to Bridlington on the east. The holiday was booked through Saddle Skedaddle, who arranged all the accommodation, transported us to the start and from the finish, and took our luggage from one stop to the next. We assembled at a hotel in York and the following morning were transported with our bikes to the start on Morecambe sea front.

First, a photo at the Eric Morecambe statue and another at the official start and then we were off on the first leg, a 35 mile ride to Settle in the Yorkshire Dales.

The first miles were on a cycle track alongside the river Lune but then the hills began with a testing climb onto the northern edge of the Forest of Bowland. A rolling route in perfect weather and with glorious views of the Yorkshire Dales took us to a welcome lunch stop in the village of Hornby. On then with the Yorkshire Three Peaks, Whernside, Ingleborough and Pen-y-Ghent away to our left until a final climb gave us a nice descent into Settle. In the evening we had a good meal at an Indian restaurant and explored the start of High Hill Lane, a notorious climb that was the first course on tomorrow’s menu.

Leg 2, Settle to Pateley Bridge, starting with that hill, the hardest climb of the whole route. 2.4 miles long and a leg-sapping 20% at the bottom. After 50m of slow grinding effort you reach a bend and a 12% sign. If you can still breathe, you heave a sigh of relief, but round the bend the road rises up like a wall – 12%? Never! You either walk or keep forcing the peddles round. But at the top, the sun was out, the views were glorious and the long descent to Airton was great fun. We took a detour to Malham for a welcome coffee and cake stop, before riding up to see the very impressive Malham Cove.

Back on the main route the sun, took his hat off, dark clouds loomed ahead, and thunder rumbled. A few short miles from our lunch stop in Burnsall, we were riding in heavy rain and Sod’s Law came into play – Mike punctured! Eventually, after very welcome hot drinks, hot soup and chips at the Red Lion, we set off again, trusting our Met Office guru, Roger, that the satellite image was giving the all-clear for the rest of the day. 10 minutes down the road we were sheltering from more torrential rain under sun umbrellas outside a pub!

Nothing to be done but to ride through it and tackle the last major climb up onto Greenhough Hill, followed by a long, tricky, steep descent into Pateley Bridge. Another great, adventurous day riding this fabulous route.

Leg 3, Pateley Bridge to York was the longest ride at 50 miles. A steady climb took us out of the town but then came a long climb with 18% ramps as we headed up to the spectacular Brimham Rocks. The reward was a lovely, long, fast decent- steady Claire! – to Fountains Abbey visitor centre for coffee and cake. Then a short ride took us into Ripon and a quick photo outside the cathedral before we headed off on flat roads and cycle paths through the Vale of York battling a head wind all the way. Beningbrough Home Farm cafe provided an excellent lunch stop before we set off on the final miles to York. A cycle trail alongside the River Ouse took us into the city, where had one more stop while Mike dealt with his second puncture. Another perfect day, nicely rounded off with an Italian meal.

Leg 4, York to Wolds Village (not a village). After leaving the hotel, we soon joined a cycle path that took us out of York and on into Stamford Bridge via an old railway line. A few miles further on we stopped at The Hide café, Pocklington for a coffee and with cakes to die for – my choice, a pastry with blackcurrant filling and oodles of cream. Then on into the Yorkshire Wolds with steady climbs and increasing rain. We pulled off into a lunch stop just as the heavens opened. As we rode the final miles the rain had ceased but the sky was darkening ominously and a mile from the finish all hell broke loose – thunder, lightning and torrents of water bouncing off the road made riding a bike a bit of a challenge. As we rode into the Wolds Village yard, water was streaming down towards an open door where the owner was waiting. He quickly ushered us into a stone-flagged passage, bikes and all as the water threatened to overwhelm his drains. But we were soon warm and dry, and the accommodation & food were top notch – a fine end to another interesting day.

Leg 5 had no obvious coffee stop so we rode 30 uneventful miles to Bridlington, arriving in sunshine on the esplanade at the official end of the route. After a few photos we celebrated an excellent week’s cycling holiday with a welcome seaside meal of fish and chips.

The Way of The Roses is a ride that should be on every cyclist’s bucket list, and you couldn’t do better than booking through Saddle Skedaddle who were excellent in every way.